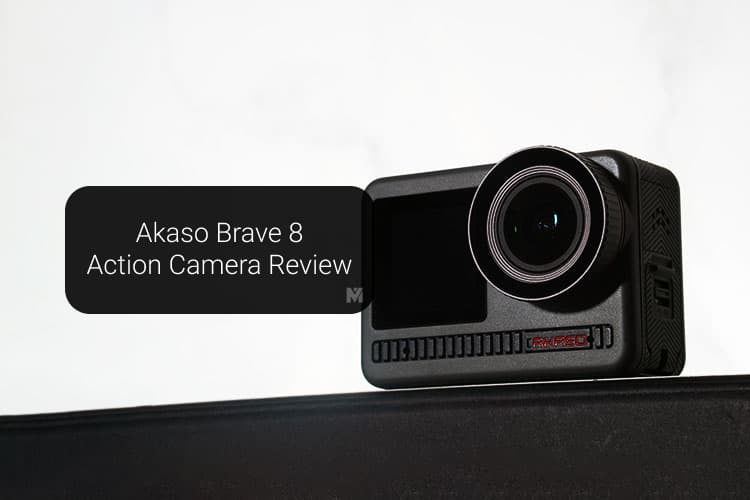 Owning an action camera is just awesome. GoPro, as you know, is the best in the league but you will have to pay a bit over the odds. That’s where AKASO Brave 8 takes the lead. It is competitively priced, packed with exquisite features, and offers excellent video quality.

The new AKASO Brave 8 has been with us for quite a bit of time and we’ve done some serious testing a couple of days. Here we will be explaining in detail what the Akaso Brave 8 is capable of and why you should lock your eyes on this deal right now.

The AKASO Brave 8 is the newest addition to the AKASO’s Action Cam series. It is a complete overhaul of what you’ve seen before with the Brave 7 LE. Most of the aspects including the design and video quality have got a stark change with the new updated Brave 8. It’s one of the best alternatives to the expensive Go Pro Hero 9, which is still the crowned prince when it comes to Action Cams. Packed with design gimmicks and near Go Pro mimics, the Brave 8 does manage to turn in some attention. 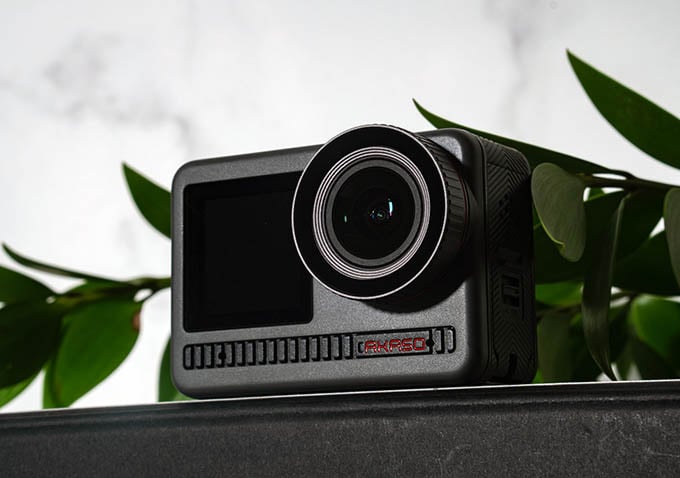 The camera department isn’t the star but well, it tried its best to give you a near GoPro experience. The sensors and the Video modes are exceptional, I must say. The 4K 60fps is relatively new to Akaso and that’s somewhere the AKASO needs to give some attention. But overall, the video modes including the 4K Time Lapse and Slow-Mo left me dumbstruck.

The fact that it gives you a good user experience at just a fraction of what you’ll have to pay for the Go Pro is phenomenal. The sturdy design, on the whole, adds a bit of luster to the device. On the other hand, the 1550mAh battery is something that we have mixed opinions about. Also, being waterproof to up to 33ft makes it pretty much a good companion for your adventure trips.

The AKASO Brave 8 includes some fancy specs that include the Ambarella H22S85 chipset, 48MP IMX Image sensor, and so on. We’ll be talking more about the camera department and the video performance as we move on. We’ll also be dealing with the overall specs, design, and connectivity in a more comprehensive manner.

Before proceeding any further, it’s important to thoroughly understand the specs. Equipped with the new Ambarella chipset, 48MP camera module, and 4K at 60fps recording, the AKASO Brave 8 is a great deal you should keep an eye on.

The Brave 8 has gone through some make-over. That’s evident when you compare it with the Brave 7 LE. There are design gimmicks that are evident the moment you get the device out of the box. The camera is solid and looks quite sturdy. 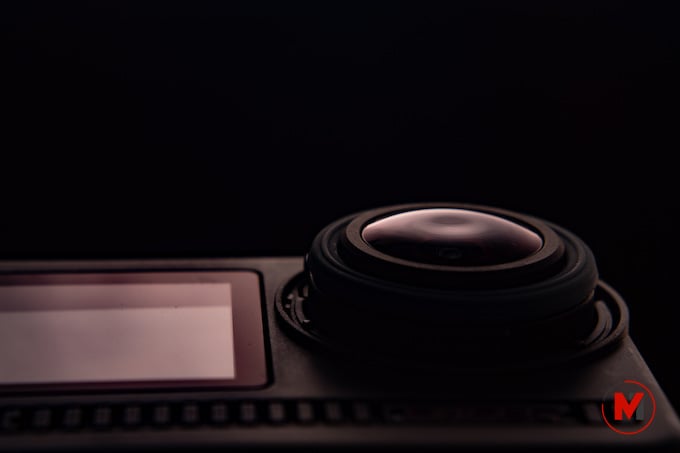 There are few-dimensional similarities with the Brave 7 but the overall design feels robust and fresh. The camera lens stands a bit burst out but that doesn’t hamper the looks. There are buttons on the sides as well as the SD and charging port.

With the protective case on, the navigating between the buttons felt a bit hazy, but that isn’t a big issue. On the front, you’ll find the selfie screen. It is quite good if you plan to take snaps with the inbuilt 48MP camera. 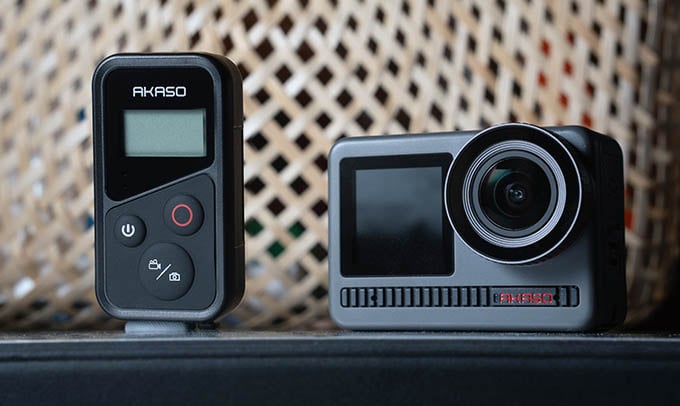 On the rear, there is the touch screen LCD screen. The touch-enabled screens make it easy to play with the camera options and video modes with ease. What I liked the most is that the brave 8 comes with a set of all essential accessories without having to pay extra unlike most other brands. The accessory kit includes a handy metal lanyard and a set of mounts useful for extreme sports. 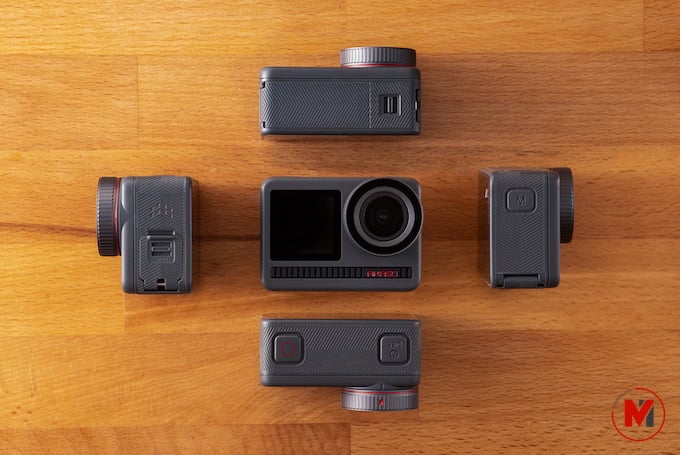 On the whole, we did feel a good build quality. The camera housing is sturdy and the accessories decent enough. It isn’t premium, but keeping in mind the affordable price tag, it’s a good deal.

The Brave 8 is exceptionally better than the Brave 7 LE but is no match for the Go Pros or the DJI action cams. The Brave 8 comes with a 4K video recording at 60fps. That’s the main update in spec when compared with the Brave 7. Also, with better light sensors thanks to the IMX 586 sensor, the images and videos feel better than what I was expecting.

The 4K video quality is best felt in optimum lighting. The dynamic range isn’t that good but scaling down to a lower resolution gives a better video output. The nighttime recording is just okay and there’s a bit of haziness that becomes evident once you start processing the recorded videos.

The Brave 8 comes with inbuilt image stabilization. But the catch here is that it doesn’t work at 4K resolution. The point where the 4k resolution excels is with the Time Lapse Mode. With the correct image setting, you’ll find that the Time Lapse mode really does turn out to be better. 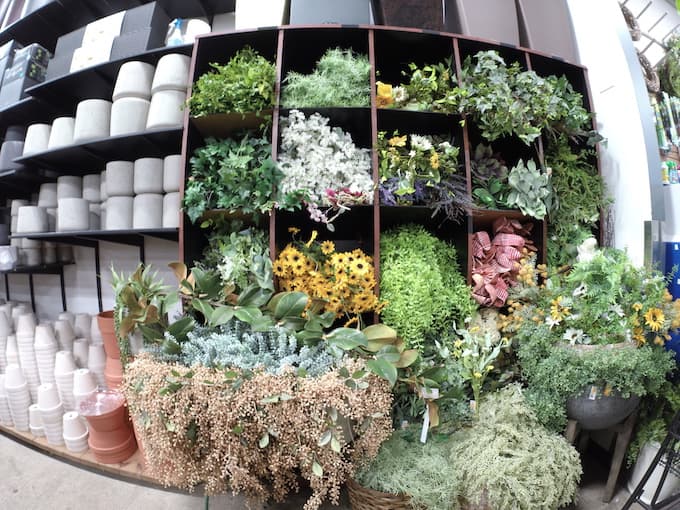 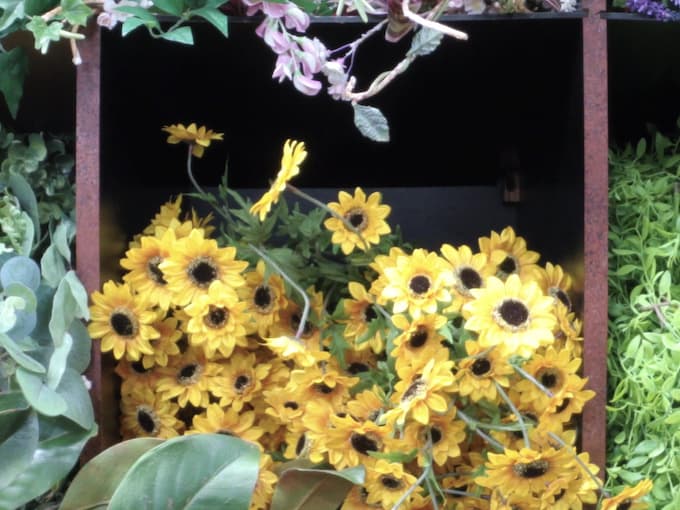 Finally, Slow Mo is one of the best video modes that I genuinely felt good post-processing. A small flaw that we felt was the lack of shutter speed control and stuff. Don’t know why but Akaso deliberately left some things off.

The AKASO Brave 8 can record in two modes, the normal Stereo, and the Human Voice. The Stereo mode is the normal recording mode and offers the true sound quality of everything in and around the frame.

The Human Voice on the other hand gives emphasis on the user’s voice. The mode suppresses the ambient noise around boosts your voice in order to give crystal clear voice output. This makes it a favorable device for the adventure vloggers out there.

The Akaso Brave has some good features up its sleeves. It offers good image stability and decent videos. There are a lot of video modes to choose from and that makes it pretty much suitable for adventure vloggers. Some of the good features that I think are worth mentioning are;

The image sensor on the new AKASO Brave 8 is something that came to match up with the Hero 9. The 1/2” CMOS sensor on the camera lets you take good quality images and facilitates better video outputs. The 48MP stills taken from the Brave 8 felt quite good. The images weren’t overexposed. You can choose from three images modes, the Super Wide-angle, and the Portrait mode. 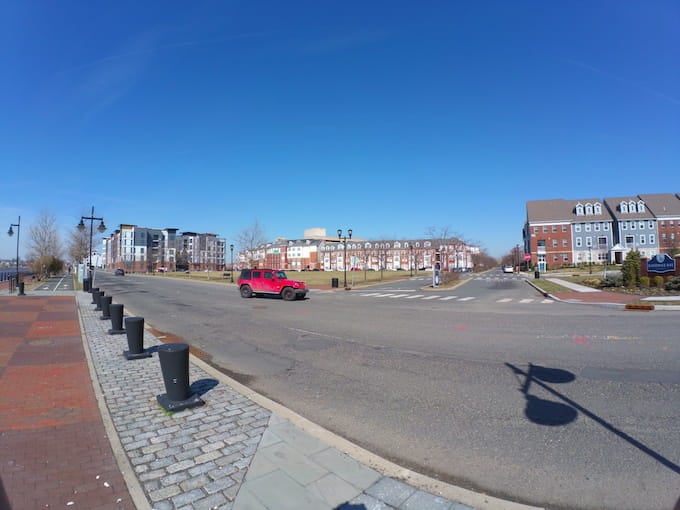 The wide-angle images look quite nice and are sharp. But there’s evident clarity loss once you set it to the narrow mode. The Wide-angle also eliminates the Fish Eye distortion that’s seen with the Super Wide Angle Mode. 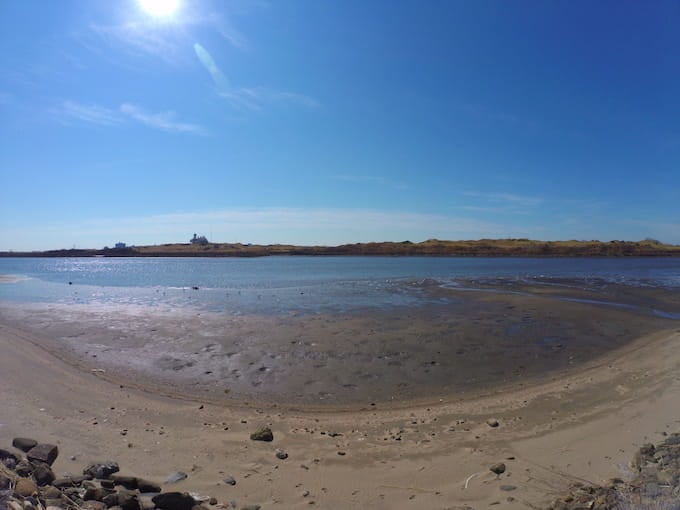 The AKASO BRAVE 8 offers the highest video output of 4K at 60fps. The output videos are sharp at optimum lighting but lack stability. And the inbuilt EIS doesn’t work with the 4K Resolution. On the frame rate comparison, there are quite some action cams that offer 4K at 120fps though.

The AKASO Brave 8 features dual LCD screens. The front 1.2” screen is just a selfie screen, to let you give an overview of your selfie snaps. The rear touch-enabled 2” screen is the primary one. You can access the settings and toggles from the rear cam. Also, long-pressing the Mode button switches between the front and rear cams.

The Brave 8 unlike the Brave 7 offers several metered modes. The AI Face Metering and the spot metering lets you get good quality images and videos. But on a bigger scale, the cam doesn’t match up to the mark of the bigwigs like the GoPro Hero series of the DJI Action Cams.

The AKASO Go app isn’t really up to the mark. Its outdated and glitchy UI is a real pain. As of now, there’s only the Android version available and that’s a huge problem if you’re an iOS user. Also, an easy video transfer isn’t possible as there isn’t a PC suit available yet. The lack of a PC tool needs you to remove the SD card, insert it into your card reader and then connect it with your PC for post-processing. That’s a big drawback in this time of wireless file transfer.

The AKASO Brave 8 includes two 1550 mAh rechargeable batteries. The battery backup to be frank is barely average as most flagship action cams provide you with exceptional battery backup. 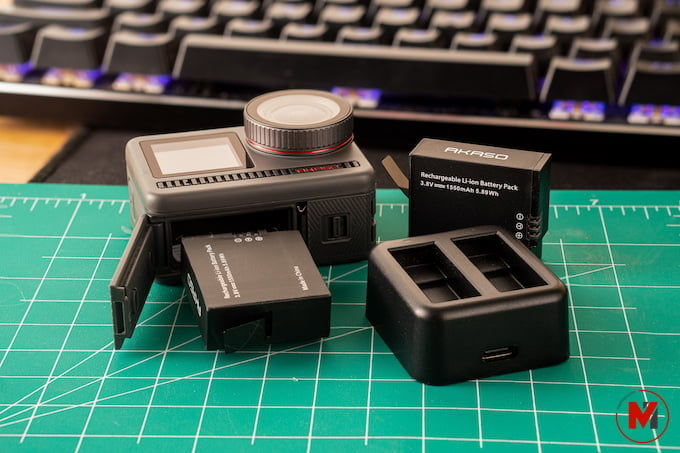 The batteries offer a combined runtime of around 90 min on the 4K recording. Scaling down the resolution to lower resolution eases the battery a bit snd provides you with a battery backup of around 110 minutes.

The AKASO Brave 8 includes a USB C port for easy charging. But being limited to 1550 mAh does make you on the downside if you’re planning to shoot every bit of your day. The thing is, you’ll need to run to the power socket now and then or you’ll need to equip yourself with an external battery pack.

What’s in the Box

The AKASO Brave 8 comes in a fine package which includes the Action Cam as well as all the essential accessories. The package was intact and looked kinda premium. With the whole delivery, you’ll be getting; 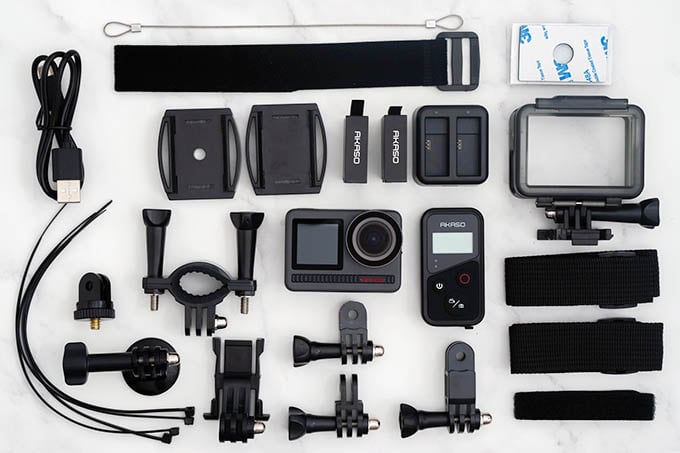 The AKASO Brave 8 as we said earlier has a pretty competitive price tag. It comes with features that do justice to the pricing. As of now, it is tagged at $279, and at this price, it is fairly set its own standards pretty high.

But there are certain setbacks that could make you doubtful whether to go on or not. If you really believe the AKASO Brave 8 is suitable for your needs, then head on to AKASO’s official website right away or you can use Amazon pre-order link.

The AKASO Brave 8 is fairly priced and has features that suit those who seek adventure. It is pretty good in terms of pricing and built quality. But there is a bit of downfall that can take away its luster.

The prime accused here is the glitchy software and outdated app UI. The software is so glitchy that you’ll most probably encounter screen freeze sometimes. Compared with the outdated software that runs on the Brave 8, I do feel that its lower version, the Brave 7 LE was a better alternative, it is around $100 less and is not at all glitchy.

But on the other hand, the device does manage to put up a decent performance in the video and audio departments. Well, not exceptional I would say, but rather a value-for-money pack that a beginner would definitely like. It is up to you to take up the decision of either going for the Brave 8 or not.